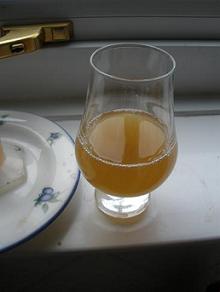 I had another shot at cloning this beer on Saturday.  This time, I just did a 5 gallon batch.  I’m finding 10 gallons is a little much to have on hand seeing as I’m – more or less – the sole drinker.  The recipe is here.

The problem with the last effort was primarily fermentation, the clone I made had a slight, musty alcohol aroma and was not as clean overall.  It was also slightly darker.  I substituted the medium (120 EBC) crystal for a lighter variety (60 EBC).  I also used some top-cropped California ale yeast from a previous batch which I got active in a 1L starter before pitching.  I’m keeping the ferment at a subdued 17C.

Although this is primarily a Cascade hopped beer, I can’t really include it in my single hop series of beers because I used Northern Brewer for bittering.  I did, however, do a beer single hopped with Columbus last week which i’ll update about soon.